Episode 87 The Story of Emo 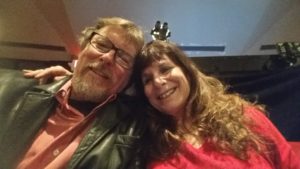 Emo and his wife Frani

Emo worked for decades as a computer engineer. Additionally, he had been a professional rock n’ roll bass player with about 200 musical dates a year. Life was good and extremely busy.

In October 2014, Emo was working on a software project when he suddenly went completely blind. He was taken by ambulance to a hospital emergency room, where people completely misdiagnosed his stroke. They thought there was something wrong with Emo’s eyes, so they sent Emo home and told him to call his doctor in the next seven to ten days. Emo called his doctor right away who had him go to an ophthalmologist to get my eyes checked out. The ophthalmologist said my eyes were fine. So the doctor referred him to a neurologist. The neurologist immediately sent Emo for an MRI where they determined that Emo had had a stroke. They always say you should get stroke treatment immediately, but by this time it was four or five days later.

Emo is grateful that he does not have any paralysis or speech problems, although he has a little trouble keeping his balance sometimes. Over a few months, his eyesight gradually came back about 80%, but Emo still has peripheral blindness in the upper left quadrant of both eyes. The initial blindness was such a devastating problem that it took him several months to realize that he had also lost a lot of cognitive function. Emo’s wife has had to take over all the family finances, including paying all the bills.

Emo has been doing his best to utilize the exercises on Luminosity.com and BrainHQ.com, but the exercises that seem difficult with minimal results so far. Emo is blessed with a wonderful wife who is very sympathetic and understanding. He does not know what he’d do without her.

Listen to Emo as he shares his story and his perspective on Luminosity and BrainIQ with Cam, our host.