Episode 80: Relentless – The Story of Ted Baxter, a Former Banker 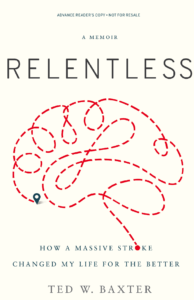 Ted Baxter has an extraordinary life.

With his scholastic achievement, he managed to fund his own college education. He then built his new financial services consulting practice in Japan.

All this changed when Ted was hit by a stroke at the age of 41. He had no warning signs, no TIA. He was healthy as a horse, an avid exerciser, and took great care of himself. But due to his job, he spent a lot of time on airplanes and including long airplane trips, and this could be a major cause of his stroke – which as he tells his story in the book, unbeknownst to him, he had a deep vein thrombosis or DVT in his right shin that broke loose.

Listen to Ted sharing his story with our host Cam.