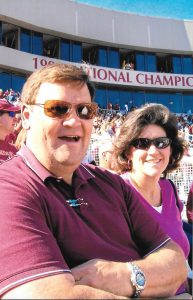 Ron Hawk and Penelope in Florida

November 13, 2013 was a day like any other day, sunny and cool. After eating the usual oatmeal breakfast, Ron Hawk went to his wife’s office and sat down on couch while she worked. He hadn’t been feeling well, and tried to get up after a few minutes. He fell forward on a large exercise ball that was blocking his way. He got up again, and stumbled to his office. His wife was concerned and followed him. He tried to focus in and couldn’t see her. When he said, “Oh, there you are!” She became concerned and called 911. He was having a stroke.

He made his way out of his office and stumbled as if drunk. While his wife was on the phone with 911, she tried to get him to answer a few simple questions, but he was only babbling.

He laid down on the bed and would not get up. He said he just wanted to sleep, and his wife and two EMT’s could not get him up. They had to call for Sheriff’s deputies to come assist them. There were 3 deputies and 2 EMT’s surrounding his bed when he finally rose from the bed and walked out of the room and onto the stretcher. He laid down, they strapped him in, and took him to the local hospital where he stayed for five hours before he was airlifted to Shands in Gainesville. From the time he went to the hospital until he was transferred to the helicopter, the weather steadiy grew worse. The nurse was not sure they’d be able to lift off. Once they did, he was hospitalized in the neurology ward for 7 days, and then another 7 days in rehab before he was able to finally come home.

Listen to Ron and his wife Penelope telling their stories. An extraordinary detour.