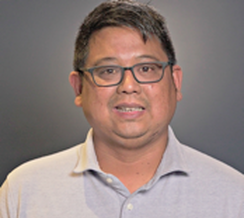 In 2003, when Manny Gigante was 29, he suffered a stroke. He was playing paintball as a referee and suddenly felt weak. Manny tried to drive a stickshift car back home 10 miles away from where he was playing. He had no idea how he made it home. By the time he opened the door, Manny lost the strength in his leg and collapsed. Manny’s wife rushed him to the Emergency Room.

Before the stroke, he was a network engineer and technology consultant in the Silicon Valley.  He worked so hard that his working hours sometimes exceed 23 hours a day.

After stroke, Manny spent 2 years in a wheelchair. In 2005, Manny lost his son due to an accident.

Although he was supported by his wife and three other kids, Manny found it hard to adjust to this sequence of tragedy. He disconnected himself from his old friends and even family members. Manny sank into deep depression. However, he later realized there were so many things to be grateful for. Instead of playing sports with his kids, he could coach them to be better human beings. Local support groups turned out to be very helpful.

Many years later, Manny has totally reinvented himself. He entered real estate business. Now he is working as a social network specialist for a number of startups in Silicon Valley. Manny is devoting a lot of time to help the local stroke community.

Manny’s daughter who is 21, wants to become an Occupational Therapist because of her dad’s experience.