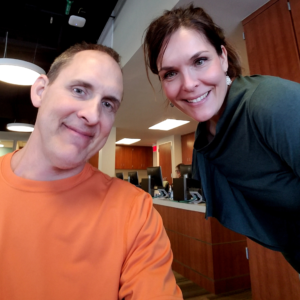 Frank graduation from his rehab program years ago

Dr Gary Steinberg and his team in Stanford has made a breakthrough discovery on stroke. After stroke, brain circuits are not dead but dormant. Injecting adult stem cells could awaken them resulting in dramatic recoveries.

Stem cell therapies are offering a lot of hope to stroke survivors. There are many Americans who are willing to pay to get into the trials, could not get in, despite their willingness and ability to pay. Frank Plemons is one of them.

Frank works as a Dell sales coach. He is an avid biker. Years ago, when biking with friends, Frank ran into an accident which nearly killed him. He suffered a head injury which led to a stroke. Frank is otherwise very strong and healthy.

In the rehab, Frank did everything he can. He worked hard and achieved what was considered a wonderful recovery.

However, Frank found the condition unacceptable. As a father of 4 year old son and a wonderful husband of a very supportive wife, Frank went on a journey to look for ways to restore himself. Frank has been following closely the stem cell trials especially the one led by Steinberg. Its breakthrough result reported this year got Frank very excited. However, getting access to it seems really hard.

He has been very persistently working to get some of the best neurologists in Dallas to help him get into the Steinberg trial. Frank even got one of Dr Steinberg’s friend to write a letter on his behalf. He got denied over and over again.

Unable to get to any of the domestic trials, Frank instead went to Mexico twice, paying the cost out of his own pocket. One trip gave him remarkable results. In the process he even found a clinic in Belgrade willing to help him. Frank has found a new clinic in Mexico. He is going for the third time. In this interview, Frank shares his journey and what is missing in today’s stem cell process.