In December 2014 Michelle’s life was changed forever. She was driving on a duel carriageway that she used everyday. Later, she learned there was a Buzzard swooped down and smashed the windscreen of a small truck that was travelling behind her. The truck hit the back of Michelle’s company smart car really hard. She was pushed into the central reservation. The road was closed for hours. Michelle was airlifted to the Royal London Hospital. 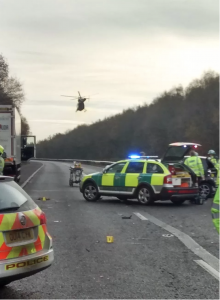 Michelle’s life was forever changed in 2014

In the following years, as she recovers, Michelle became an active advocate for brain injury survivors. She runs a blog called Jumbled Brain, with thousands of followers on Twitter. (Connect to Michelle with her Twitter handle @michelle_munt)