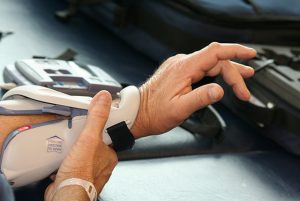 It is widely believed that stroke recovery ends by the 18th month.

In 2017, a case has been published that a Canadian survivor John Humphrey made significant recover on his motor skills 23 years after stroke.

Hand in Hand Show had a special discussion with John and his doctor, Professor David Spence.

How did it start? How did John notice that his affected hand start to move? Did he have any doubts? How did he reconnect with Dr David Spence? And many more.

This is a very inspiring discussion. Stay tuned and join our special social media: https://www.strokefocus.net, and continue your discussion with John.

Dr David Spence, Board of Directors of the World Stroke Organization, representing the Americas

Professor Spence has focused on prevention of stroke throughout his career. He pioneered the measurement of 2-dimensional carotid total plaque area beginning in 1990, and since 1994 has collaborated with Prof. Aaron Fenster and Dr. Grace Parraga at the Robarts Research Institute in measurement of 3D plaque volume, plaque ulceration and assessment of vulnerable plaque. He also pioneered a new approach to vascular prevention “treating arteries instead of treating risk factors”, that has markedly reduced risk among high-risk patients with carotid stenosis. His research program focuses on measurement of atherosclerosis by ultrasound, for patient management, genetic research and for assessing effects of new therapies. Other areas of expertise include vitamin therapy for homocysteine, the clinical pharmacology of stroke prevention, physiologically individualized therapy for resistant hypertension and identification of high-risk asymptomatic carotid stenosis. Despite a busy clinical practice, his publications include 4 books and over 450 peer-reviewed publications (not including abstracts), with an H-index of 59 on Web of Science, 61 on Scopus and 75 on Google Scholar, with an i10 index of 247..

In 2008, Prof. Spence was inducted as a Fellow of the Canadian Academy of Health Sciences. His role in teaching of stroke prevention to neurologists and general physicians includes more than 600 invited lectures in 39 countries. He was chosen by the World Congress of Neurology to teach the workshop in Bangkok, Thailand on Stroke Prevention in 2009, and by the World Stroke Organization (WSO) to coordinate the course in stroke prevention at the World Stroke Congress in Hyderabad, India in 2016, and to teach in the WSO stroke course in La Paz, Bolivia in 2017.

In November 2010 he was honoured by the Universidad Católica of Cordoba, Argentina for his role in education of Argentinean physicians in vascular prevention over the previous 10 years, and by the Obra Social Ferroviaria of Argentina (a health maintenance organization operated by the Railroad Workers’ Union) for his role in establishing early atherosclerosis detection programs at a number of Obras Sociales across Argentina, based on his method for measuring carotid plaque area.

In 2012 he was elected to a 4-year term on the Board of Directors of the World Stroke Organization, representing the Americas.

In 2015 he received the Research Excellence Award from the Canadian Society for Atherosclerosis, Thrombosis and Vascular Biology.

Prof. Spence is currently investigating, with funding from CIHR, the role of the intestinal microbiome in extremes of carotid atherosclerosis.

In 2016, Prof. Spence was appointed Co-Investigator and member of the Steering Committees of the Chinese Stroke Primary Prevention Trial 2 and the Million Hypertensives project in China, and Senior Advisor to the Chinese Framingham study (the Anqing Cohort, begun in 1990).